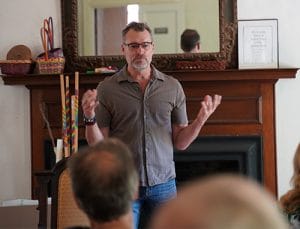 “There is apart from mere intellect, in the make-up of every superior human identity…a wonderous something that realizes without argument…and intuition of the absolute balance of the world; a soul sight of that divine clue and unseen thread which holds the hold congeries of things…such soul sight is the root-center for the mind.” – Walt Whitman

There is little doubt that the poet Walt Whitman practiced a form of meditation as his words above indicate.  Over the last twenty years, I have been fortunate to lead hundreds of people in meditation using Whitman’s specific practice.  Whitman’s practice helped to transform him from a mediocre newspaper editor/writer, novelist and poet to one of the world’s greatest and unique artists.

We celebrated the poet’s bicentennial birthday in Washington, DC with a six week-long festival sponsored by HumanitiesDC, in cooperation with the Whitman 2019 Consortium.  There were 52 separate events and 29 community partners www.walt200.org incorporating the poet’s themes of unity, democracy and healing.

On May 25, a group of us gathered at the Friends Meeting of Washington DC in Dupont Circle to practice Whitman’s meditation and for a few moments to leave the “subjective world suspended or surmounted for a while” as Whitman wrote.  We read his words and looked and listened to the silence of our own integral selves.

Each of us has access to the same soul sight as Whitman, Buddha, Mohammed and other divine human beings…with practice.  There is no single way to realizing enlightenment and actuality without deeply examining ourselves moving beyond contextualized thought which is rooted in subjective interpretation.

In a world that is full of complexity that includes all the glory and horror we can imagine; I believe that Whitman and many other wise and creative adepts including artists of myriad kinds accessed their inner selves in creation.  Our life is the creation of our mind and it is magical when our creativity sparks something in someone else they could not have created alone.

It is a beautiful occasion when a group of people can gather and share an intentional silence.  On that day, in honor of Whitman’s 200 birthday, I was very grateful to be in that space and at that time with a wonderful group of explorers of the soul.