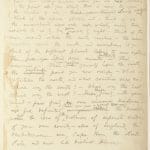 Below, I have transcribed the handwritten notes by Whitman describing his meditation practice because his writing may be difficult for some people to read.  Below that, I have also included a description of the meaning of the meditation.  Click on the original diary entry to enlarge Whitman’s writings.

Transcript of the Walt Whitman Meditation

Abstract yourself from this book; – realize where you are at present located, The point you stand, that is now to you the center of all.

Look up overhead, think of space stretching out-think of all the unnumbered orbs wheeling safely there, invisible to us by day, some visible by night-think of the sun, around which the earth revolves-the moon, revolving round the earth, and accompanying it; think of the different planets belonging to our system.

Spend some minutes faithfully in this exercise.

Then again realize yourself upon the earth, at the particular point you now occupy Which way stretches the north, and what countries, seas etc? Which the South? Which way the East? Which way the West?

Seize these firmly in your mind-pass freely over immense distances, Fix definitely, (turn your face a moment thither) the directions, And the idea of the distances, of separate sections of your own country- Also of England, the Mediterranean, Cape Horn, the North Pole, And such like distant places.

In the top margin Whitman wrote the following notes to himself:

(Outset of Lecture I imagining myself from that condition mentioned. You must do the work, you must think. To You First of all, prepare for study by the following self teaching exercises) (NUPM, VI: 2049-2050)

Meaning of the Walt Whitman Meditation

I have studied the original handwritten page and transcript; I have practiced this meditation countless times. I have led this meditation with several groups of people, some Whitman enthusiasts and other meditation practitioners from a variety of faiths. My experiences with this exercise confirm my belief that this is a meditation practice that Whitman used to access his deepest spiritual and creative states of consciousness in preparation for writing. Gene Edward Veith Jr. who spent years studying and cataloging Whitman’s notebooks and unpublished manuscripts guesses that this was written in approximately 1856. Many scholars believe Whitman’s early writing was his most inspired and the first edition of Leaves of Grass published in 1855 along with the 1860 edition are considered his masterpieces. It is clear (to me) that Whitman was employing his meditation exercise in the creation of his greatest work and he felt confident enough of the results he was enjoying that he intended to hold a lecture of public talk describing his creative process. The eternal truth of Leaves of Grass is more valid and more illuminating if the source of creation derives from the heart of spirit instead of intellectual metaphor  and supposition. If Whitman’s message is experiential employing a practice thousands of years old, we too can have access to truth that goes beyond the merely rationale. In short, Whitman articulates creations’ voice using a tool available to everyone thus democratizing our spiritual or enlightenment possibilities. We no longer need the priest to interpret and access god.

Meditation can be practiced in myriad ways and all the great religious traditions recognize the unique connection a person can have with God, Spirit, Atman or Godhead or the other myriad names for ultimate reality though the practice of meditation. Whitman’s meditation practice is not unlike the centering practice that many spiritual or secular therapeutic practitioners use to better grasp our large and small place of being. Leaves of Grass possesses many passages reflecting a deep and sustained insight into his enlightened state and Whitman’s poetic vision and words display a vivid description of our spiritual landscape. Interestingly, the persona/soul who creates the poems is of a different voice than Whitman’s everyday voice as expressed in his diaries and conversations with people. I believe this is due in part to a meditative practice that often spawned his poetic persona.